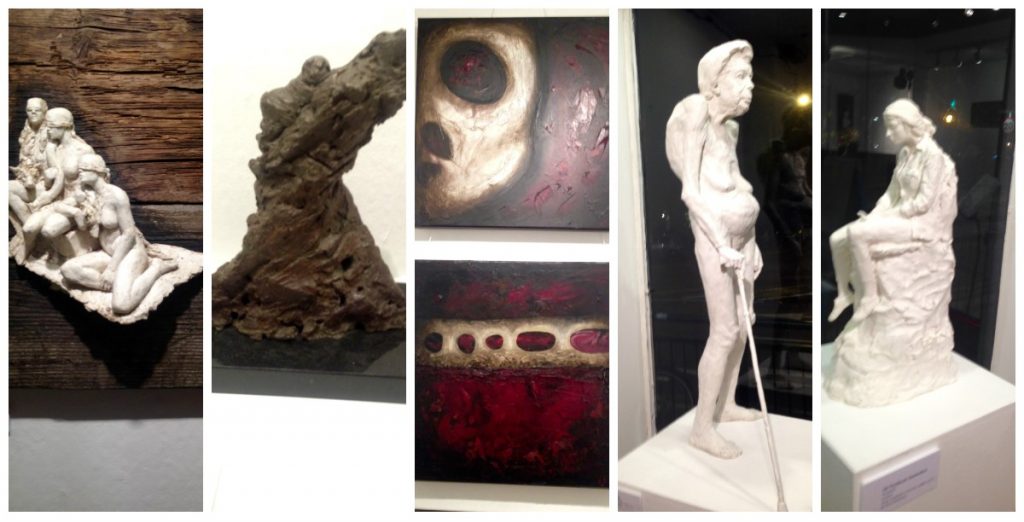 “Blood and Bone explores the female archetypes, touching on physicality and womanhood. Throughout this collection of work, Eve Shepherd successfully tells the story of the never-ending cycle that is ‘female ancestry’. It is evident in her work that Eve is highly skilled with her materials and techniques, showing particular knowledge of the human anatomy. Eve began her training under animal sculptor Anthony Bennett at the age of seventeen, and eventually worked her way up to the role as head of the sculpture department at Scenic Route. Throughout her career, Eve has worked at a fast and accurate pace, producing work to meet high demands, which is why she is so confident and fluid in her skills today. She notes the work of sculptors Barbara Hepworth and Branscusi, as work she admires.

The first thing that struck me about these pieces, was their fragility and haunting appearances, and there was something so delicate about the elongated and ghostly figures. The female forms were not perfected or idealised, but rather full of character that was expressed through the emotion in their faces and life-like stances. One of my favourite pieces in the exhibition was the work called Blood Line. It features three figures, an elderly woman, a mother and a young girl. The older woman towering over the young girl, who stretches her neck to look up towards them. It is an emotional piece, and becomes even more so as you begin to unravel it; all figures are joined at the base and there is a sense of nostalgia in the expressions of the older women as they look down on what physically was their past selves. On the other hand, there is a sense of curiosity and excitement, as the young girl looks up to what she has yet to experience.

Eve’s sensitivity and attention to every detail of her work, from the making to the presentation is truly amazing. The mediums she used were carefully selected to echo the subject of her work; the iron used in the firing of the pieces is left evident in most of the bases of the sculptures, alluding to the idea of blood. Her use of clay, which is a natural material, could be referring to the idea of bone. Three oil paintings were included in this exhibition, depicting blood and bone and actual bone material was used in the pigment of the paint. Although Eve says that she is still building her confidence in painting, the exhibited pieces in what could be a triptych give the exhibition a sense of diversity.

Walking through the exhibition, all the pieces worked together in harmony and the intimate gallery space was ideal for such an emotionally engaging subject. It was clear that the artist had control over how the works were to be presented, which was refreshing to see, and allowed the artist’s voice to be heard beyond the pieces themselves. For example, the works ‘Dignified’ and ‘Facebook Generation’ were two pieces that were not made together, however their shapes echo one another. Placing them side-by-side seems only natural, and that small detail really brought the artist’s thoughts.

The works included in Blood and Bone show clear craftsmanship and skill, yet like the traditional techniques used in these pieces encompass a subject that is contemporary and relatable. Eve’s work is thought-provoking and her painterly-like style is so genuine, it is invigorating to witness an artist who is so hands-on”