Meet Eve and hear her talk about her design
Emily Williamson’s statue has to have longevity, which is why I’ve put in so much detail, because it needs to tell so many stories.
From a distance, it’s a Victorian woman in a stiff crinoline. Get closer, and you’ll see that her skirts are actually a cliff-face studded with vignettes. Owl, heron, grebe, kingfisher… birds once used in millinery, birds that are vulnerable today; also feather workers, eco campaigners… I’d like to use ‘augmented reality’ technology to bring to life all the stories behind the story. This has never yet been done with public sculpture.

On 13 November 2021, Eve Shepherd won the public vote to create the statue of Emily Williamson.

Over 12,000 people from across the world voted in the competition between four short-listed sculptors. Eve was a clear winner.

My version of Emily draws together both person and landscape. She protects the birds, women and girls within her care; she is the ‘mother of nature’.

Visually, the statue will blend in with its leafy surroundings, as Emily’s verdigris skirts fade upwards to a warm conker brown. My work is designed to fit within nature and grow out of nature, as if Emily’s emerging from her surroundings. She is the conservation story. She’s Mother Nature herself.’

‘I’m honoured to be chosen to create the Emily Williamson statue for Fletcher Moss Park, Manchester and the bird loving community,’ says Eve. ‘I feel humbled and privileged to sculpt such an important pioneer and eco-activist.
‘She was a visionary;  a quiet, yet stoic woman, who stood against the norms of her day. She co-created a legacy, the RSPB – a charity that has saved countless bird lives and protected precious natural habitats for future generations to enjoy.
‘In my eyes Emily is a shining beacon of how we can save our fragile ecosystem in these unprecedented times.’

Emily Williamson was forgotten by history because of her gender. This statue will be both a triumph and a milestone on the journey towards fair representation of women within public sculpture – though we still have some distance to go. I am delighted and excited to have been selected to be part of this!’

About the statue – Eve Shepherd

Emily Williamson was a forward-thinking, kindly and truly inspirational woman – but I see this statue as also celebrating woman-kind and animal-kind as a whole. I’m known for taking on challenging projects and giving a voice to those people and causes that often lie hidden or have been silenced throughout history.

Here, Emily Williamson is freeing a bird from her hand. Her stance is strong yet gentle, her expression and the tilt of her head show kindness yet stoic qualities. As the viewer’s eye travels down the figure, the lower section of the piece acknowledges the environmental and social aspects of Emily’s work.

From a distance her skirt will look like an ordinary crinoline dress with a bustle, but close up it’s an organic cliff face; a nesting ground depiction of the birds she worked so hard to save from the plumage trade. These birds will be lifelike and miniature, nesting within the folds of the dress as if in their natural environments. Can you spot, for example, an owl, kingfisher, snowy egret, penguin and a fledgling?

Also hidden within her dress/landscape are small scenes/dioramas depicting other women relevant to her story – for example Eliza Philips, Etta Lemon and the Duchess of Portland, who, together with Emily Williamson, built the early RSPB.

Puffin
These birds are currently on the RSPB most endangered RED list.

Albatross
This bird is very important in the sculpture.

Avocet
The Avocet is the champion of the RSPB conservation effort and the bird now used on the RSPB’s logo. This incredible bird was once extinct in the UK, but through RSPB conservation programs have brought the bird back and is now reaching record numbers.

Tawny Owl
These birds are currently on the RSPB most Amber list.

Yellow-Eyed Penguin
These birds are currently very endangered, their numbers are declining due to the (by catch) from the fishing industry.

Great-crested Grebe
This bird is one of Emily’s favourite birds and was fundamental to the formation of the RSPB, she saw how the birds were depleting rapidly in numbers. Hunted to the brink of extinction for the millinery industry they are now in the Green (safe) status within current conservation listings.

Kingfisher
Can you spot the kingfisher, its one of the hardest to spot in the sculpture! Kingfishers were a favourite in the millinery industry and today is on the RSPB’s Amber list.

Other birds to spot
What other birds can you spot in the sculpture? There are more important birds which I’ve included in this sculpture, they were either used in the millinery industry or are being helped by the RSPB today. 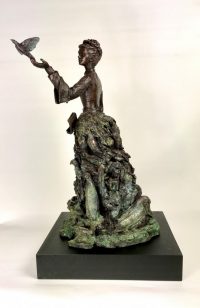 This birds ‘form’ is based on a starling, this nods a cap to Mellissa, Emily’s great, great niece who, even though she didn’t know of her Auntie Emily’s incredible achievements as founder of the RSPB, chose to study starlings for a living.

This bird is very important it shows Emily releasing the bird into the wild, as Emily in her life and her legacy protected all birds, this bird is made up of lots of birds, like a murmuration.

Emily cared a lot about people as well as birds, she founded the Princess Christian Training College for Nurses. Here Emily introduced using real children in their training instead of dolls. The sculpture shows a nurse helping a small child.

The feather trade was known for its cruel use of female labourers, girls as young as 5 were worked for long hours often using toxic chemicals to produce the plumes for hats. Emily also founded the Gentle Women’s Employment Association.

Too small on the sculpture to make, but Emily’s locket will show the other 2 founders of the RSPB, Etta Lemon and Eliza Philips, these are incredible women in their own right, not taking ‘no’ for an answer!

Emily is holding the Plumage Act in her hand.

Managed on the 1st July 1921 to get their Plumage Act agreed in the House of Parliament, this meant that feather and bird skins were not allowed to be imported into the UK, thereby rendering the use of feathers in fashion obsolete.

Emily’s dress shows the various habitats which birds live in. Healthy, unpolluted environments are important for animals and birds to live happy, healthy lives. The RSPB helps to make and maintain good habitats. How many different bird habitats can you find in the sculpture?

Emily has been described as quietly dignified and determined. I thought that she must also have been a very strong and caring person. These are the personality traits Emily would have needed to create such an important organisation in the ‘man’s world’ she lived in.

Selection Committee Chair Andrew Simcock says:
​’We had four high quality entries on this shortlist. We’d like to thank sculptors Clare Abbatt, Billie Bond and Laury Dizengremel for their massive contribution to this contest.

As I toured the four countries of the UK visiting RSPB reserves with the maquettes, there was tremendous engagement with the designs. Eve’s, in particular, was a big hit with children. There was a real sense of their delight as they realised how many birds were present in Emily’s skirt.

Many congratulations to Eve and I really look forward to working with her to make this statue of Emily Williamson become a reality.’

​Social Historian Tessa Boase, who has done so much to bring this project to life, says:
‘Sculptor Eve Shepherd is renowned for the depth of her research, and her iconoclastic approach to public artwork. Her statue of Emily Williamson will be an inspiring monument not just to a woman, but to the beauty and vulnerability of birdlife.

If we want the next generation to cherish nature and to safeguard biodiversity, we need to engage young minds and hearts – through telling stories. This statue will contain a multitude of stories and species, drawing the viewer back again and again. Eve’s proposed use of augmented reality technology to enhance interpretation will bring an exciting extra dimension.

We couldn’t be more thrilled with the public’s choice of statue to stand in Fletcher Moss Park, Emily Williamson’s garden.’

The winning design for a statue of RSPB founder Emily Williamson has been revealed.

The campaigner set up the organisation – now the UK’s largest nature conservation charity – in 1889.

A spokeswoman for the statue project said it hoped it would highlight her legacy, even though “history books had not acknowledged her role”.

The artwork, which depicts her watching a bird take flight, will be unveiled at her former Manchester home in 2023.

Emily Williamson started the Society for the Protection of Birds in 1889.

Born in 1855, the nature lover set up the Society for the Protection of Birds after being appalled by the slaughter of birds for fashion in the 19th Century.

Now known as the RSPB, the charity said her all-women movement was “born out of frustration that the male-only British Ornithologists Union was not acting on the issue”.

In 1921, a law was introduced that banned the importation of exotic feathers and led to many species avoiding extinction.

A spokeswoman for the Emily Williamson Statue Campaign said plans for her statue began in 2019 “with the shock that the history books had not acknowledged her role in founding the RSPB and then the realisation that her powerful legacy could inspire action and activism today”.

About 12,000 people voted after four shortlisted designs were shown at RSPB reserves, before the winner was announced at Manchester Art Gallery.

The sculpture, designed by Eve Shepherd, also shows Mrs. Williamson holding a copy of the 1921 act. Emily died in 1936.

The statue will be unveiled near her former home in Didsbury’s Fletcher Moss Park on the anniversary of her birth on 17 April 2023.